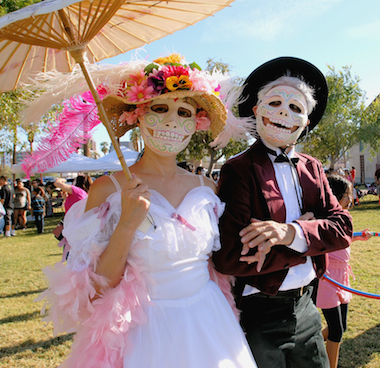 Info and Schedule of Activities at http://diadelosmuertosphx.com/

This program is supported in part by Arizona Humanities.

The Dia de los Muertos Phx Festival is an interactive, multi-generational, and participatory cultural immersion event blending traditional Mexican experiences with a twist of Southwestern flavor. The festival aims to instill a sense of history, pride and knowledge about our multicultural roots to the community at large through culturally relevant programming and activities.

The 4th Annual Dia de Los Muertos Phx Festival will take place on Sunday, October 25th from 1 to 6 pm at Steele Indian School Park on 3rd Street and Indian School Rd in Phoenix, AZ. Participants will be greeted and entertained by more than 150 performing artists, many as masked characters. The Artists Mercado will feature some of Arizona’s best local artists. There will also be food booths, arts activities and of course, the traditional Candlelight Procesión at 5:30 pm. This year we will also feature a Community Altar. Bring a picture or memento to place on it. It is a memorable community event!

Cesar Castro: Founder of Cambalache and workshop leader, originally from Veracruz, Mexico, began studying Son Jarocho at the age of 11 with renowned harpist, Andres Alfonso Vergara. He continued his studies with Gilberto Gutierrez of El Grupo Mono Blanco, and at age, 16, he joined the group formally. With Mono Blanco, Cesar not only travelled through Mexico, the United Status and Europe, he began teaching this cultural tradition in community centers, schools and universities in Mexico City and Veracruz. From Gilberto Gutierrez he also learned laudería, how to make instruments used in the son jarocho tradition. In 2001, Cesar began working with Chicanos in Los Angeles through a binational Exchange, we call, Fandango Sin Fronteras. This binational Exchange forges relationships cultivated through music, focuses on building community and awareness through social gatherings, el fandango and participatory performance. In 2003 he moved to Los Angeles to teach Son Jarocho in community spaces like, Tia Chucha’s Centro Cultural in san Fernando, Eastside Café in El Sereno, IMIX Bookstore in Eagle Rock, El Centro Cultural in Santa Ana, Frida Kahlo High School in Los Angeles and El Sereno Middle School. Here in Los Angeles, he also formed part of Quetzal, one of LA’s cornerstone, Chicano bands and he set up shop so he could continue making instruments. Since then, Cesar has received grants from the Alliance of California Traditional Arts, both mentorship and living cultures as well as the ARC Grant and the Master Musician Fellowship from the Durfee Foundation.