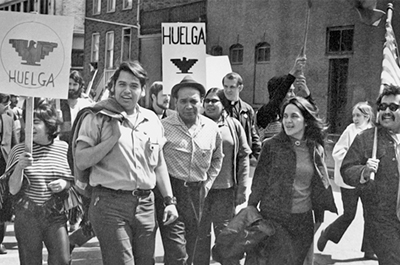 In the 1960s and 1970s a generation of Mexican Americans, frustrated by persistent discrimination and poverty, find a new way forward, through social action and the building of a new “Chicano” identity. The movement is ignited when farm workers in the fields of California, led by César Chavez and Dolores Huerta, march on Sacramento for equal pay and humane working conditions. Through plays, poetry and film, Luis Valdez and activist Corky Gonzalez create a new appreciation of the long history of Mexicans in the South West and the Mestizo roots of Mexican Americans. In Los Angeles, Sal Castro, a schoolteacher, leads the largest high school student walkout in American history, demanding that Chicano students be given the same educational opportunities as Anglos. In Texas, activists such as José Ángel Gutiérrez, create a new political party and change the rules of the electoral game. By the end of the 1970s Chicanos activism and identity have transformed what it means to be an American. Chicano and Latino studies are incorporated into school curriculum; Latinos are included in the political process.

This program is part of the Humanities and the Legacy of Race and Ethnicity in the United States Initiative.