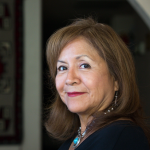 This visual presentation shows how Indigenous American women have contributed service to Arizona and the US, yet remain invisible in the media and stereotyped in early films. Nevertheless, they have been honored in all areas of public service—law, medicine, literature, military, education, and activism with awards such as, the Presidential Freedom, the McArthur (genius award), among others. Among some traditional tribal cultures, women’s lives are modeled after female heroes and sacred women who exemplify and express courage and kinship values. Rites of passage celebrate female creativity and the transformative nature of women, hence there was not a need for the concept of feminism. This talk presents cultural aspects of Indigenous culture and how women have contributed in significant ways, not only to their tribal nations, but to contemporary American life. 45-minute presentation plus Q&A. This program is being co-hosted by the University of Arizona and the Arizona State Museum. REGISTER HERE.

ABOUT THE SPEAKER
Laura Tohe is Diné. She is Sleepy Rock clan born for the Bitter Water clan. She holds a Ph.D. in Indigenous American Literature. A librettist and an award-winning poet, her books include No Parole Today, Meeting the Spirit of Water, Sister Nations, Tséyi, Deep in the Rock, and Code Talker Stories. Her commissioned libretto, Enemy Slayer: A Navajo Oratorio, was performed by the Phoenix Symphony. Her new work, Nahasdzaan in the Glittering World, makes its world premiere in France 2019. She is Professor Emerita with Distinction at Arizona State University and is the Navajo Nation Poet Laureate for 2015-2019.