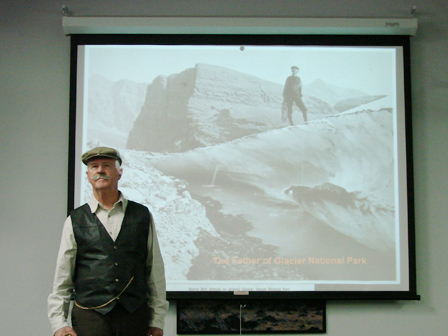 The great West that George Bird Grinnell first encountered in 1870 as a 21-year-old man was shortly to disappear before his eyes.  Nobody was quicker to sense the desecration or was more eloquent in crusading against the poachers, the hide-hunters, and the disengaged U.S. Congress than George Bird Grinnell, the “Father of American Conservation.”  Grinnell founded the first Audubon Society, co-founded the Boone and Crockett Club with Teddy Roosevelt, and led the effort to establish Glacier National Park.  Audiences will travel back in time to the 19th century, listening to Grinnell’s own words as taken from his field journals, memoirs, personal correspondence, and newspaper editorials.  Additionally, audiences will enjoy dozens of 19th-century photographs, which visually capture Grinnell’s many expeditions and discoveries.