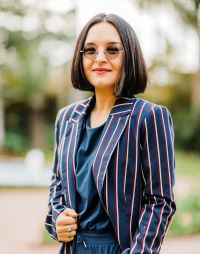 From extreme weather disasters to shrinking wildlife habitats, climate change is impacting us now…and shaping a new future. These environmental themes appear throughout the work of Lipan Apache writer and earth scientist, Darcie Little Badger. Drawing upon her background in climate science and Lipan storytelling, Dr. Little Badger imagines alternate futures and parallel worlds with magic and monsters in her short stories and books for young adults. In her most recent, award-winning novel, A Snake Falls to Earth, the story is told through the perspective of a Lipan girl living in a futuristic Texas threatened by natural disasters and invasive monster species. How does the natural world inspire new genres in literature? How can literature influence a young generation of readers inheriting the challenges of the climate crisis? Join us for a lively conversation with Darcie Little Badger about writing fiction in a time of climate change.

Darcie Little Badger is a Lipan Apache writer with a PhD in oceanography. Her critically acclaimed debut novel, Elatsoe, was featured in Time Magazine as one of the best 100 fantasy books of all time. Elatsoe also won the Locus award for Best First Novel and is a Nebula, Ignyte, and Lodestar finalist. Her second fantasy novel, A Snake Falls to Earth, received a Newbery Honor and is on the National Book Awards longlist. Darcie is married to a veterinarian named Taran.

This program is hosted by Arizona Humanities as part of the Climate Conversations series. The series if funded by the National Endowment for the Humanities.