The Ballad of Arizona

Originally conceived to celebrate Arizona’s Centennial in 2012, “The Ballad of Arizona” has been updated to provide a more complete survey of important, but often little-known, chapters of Arizona’s unique history. A blend of music, video, and lecture, “The Ballad of Arizona” is similar to “A Prairie Home Companion” but with an Arizona twist. The dozen vignettes featured in the presentation include the Buffalo Soldiers, dude ranch history, the Code Talkers, forester Aldo Leopold, Japanese-American Internment, famous cattle drives, the assassination of reporter Don Bolles, and more stories that explore Arizona’s unique cultural and natural diversity. Jay Craváth is joined by Dan Shilling for this entertaining two-person presentation that combines song and story. 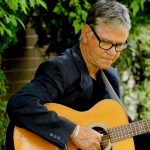 Dan is the former executive director of Arizona Humanities, where he worked for nearly 20 years. Since leaving AH, Shilling has co-directed three NEH summer institutes on environmental ethics, given dozens of presentations on place-based economic development, and authored or edited several publications, including Traditional Ecological Knowledge: Learning from Indigenous Methods for Environmental Sustainability(Cambridge 2018). A former high school teacher, Dan holds a PhD in literature from ASU. He has served on dozens of boards and commissions. To acknowledge his many contributions to the state, ASU presented him its most prestigious honor, the Distinguished Alumnus Award.