Mankind has dreamed about and longed to explore space for ages. We are indeed fortunate to be living in this slice of time when we actually have the ability and technology to do it! This presentation will discuss the successes, failures, adventures, and discoveries of the final frontier.

Dr. James Rice, is an Astrogeologist with over 30 years research experience specializing in the exploration of the Solar System, especially the Moon and Mars. His career includes working for NASA, The Astrogeology Headquarters of the United States Geological Survey, the Mars Spaceflight Facility (ASU), and the Lunar and Planetary Laboratory (UA). He has a PhD from Arizona State University, MS from the University of Louisiana and BS from the University of Alabama. 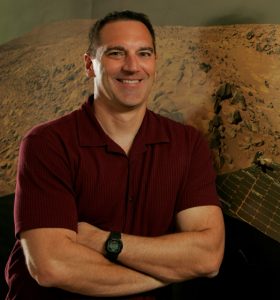 Currently, Rice is a Senior Scientist and Geology Team Leader on the NASA Mars Exploration Rover Project (Spirit and Opportunity). Rice trained and briefed NASA astronauts in geology and Mars exploration. He has been a leader and team member on numerous international geological field expeditions around the world including a 6 month long NASA/Russian expedition to Antarctica. This work included being a member of the SCUBA diving team to first investigate the perennially frozen lakes of eastern Antarctica. Rice served on numerous NASA Science Analysis Groups for manned missions back to the Moon and Mars. He received numerous NASA Moon and Mars Mission Achievement Awards and was inducted into the inaugural class of the United Space Camp Hall of Fame.