The History of the (Berlin) Wall: German Experiences for Arizona 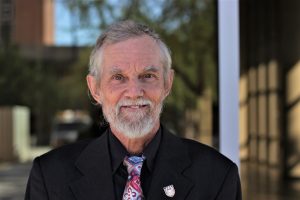 The issue of the US/Mexico border, or any border today, is of central importance. This presentation takes the history of the Berlin Wall as a starting point to address what walls have done to people and cultures throughout time. Can the Berlin Wall help Arizonans understand the critical issues better? Even if that might not be the case, the history of that ominous wall and the cultural implications deserve our close attention.

Dr. Albrecht Classen is a university distinguished professor of German Studies at the University of Arizona – where he teaches and researches the European Middle Ages, the early modern age, and modern German-speaking lands, focusing on literature, the visual arts, politics, philosophy, and religion. He has published more than 100 scholarly books, such as On the Forest in Medieval Literature(2015) and Toleration and Tolerance in Medieval Literature(2018). He has given lectures all over the state of Arizona, the nation, and globally. Over the last 30 years, he has received numerous teaching, research, and service awards, and has been repeatedly nominated for the Dan Shilling Public Humanities Scholar Award.