The Shadow Catchers: 150 years of Arizona Photography with Jim Turner 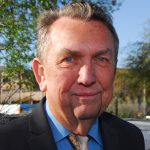 ABOUT THE SPEAKER
Before retiring from the Arizona Historical Society, Jim Turner worked with more than 70 museums across the state. He co-authored the 4th-grade textbook The Arizona Story, and his pictorial history, Arizona: Celebration of the Grand Canyon State, was a 2012 Southwest Books of the Year selection. Jim moved to Tucson in 1951, earned a M.A. in U.S. history in 1999, and has been presenting Arizona history for more than forty years. Jim is an author/editor for Rio Nuevo Publishers, author of The Mighty Colorado from the Glaciers to the Gulf and Four Corners USA: Wonders of the American Southwest.