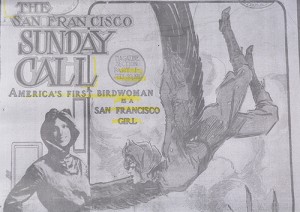 Should women be allowed to fly? In the early days of aviation many people didn’t think so. Flying was too dangerous. The first aeroplanes were little more than extra-large box kites, powered by an engine and propeller. The engine was loud, the wood supports broke and the wings often snapped. While flying, the pilot was completely exposed to the outside air, like a bird without feathers. Many early pilots were killed or seriously injured. At the Wright Flying School in Dayton, Ohio the Wright Brothers refused to accept female students.

In the spring of 1911 a mysterious new student began taking flying lessons at the Moisant Aviation School in Long Island, New York. This new student always wore knee-high boots, a one-piece Knickerbocker flight suit with the hood up and a veil covering the face. The new student was a woman and her name was Harriet Quimby.

Quimby was a good student, a natural flyer and after only 33 lessons on August 11, 1911, she became the first American woman and the second in the world to earn a pilot’s license. A couple of days later she flew in a flying exhibition attended by 20,000 spectators. Flight promoters of air shows quickly learned that the public would eagerly pay to watch a woman fly. The next spring, she became the first woman in the world to fly across the English Channel. Quimby also became the first pilot, man or woman, to fly at night. Quimby gained the reputation as a cautious, careful pilot who refused to perform tricks and stunts; however, in a tragic accident, she unfortunately became the first American woman to die while flying.

Harriet Quimby had the courage to be first. She was a pioneer in the sky as brave and courageous as any other American pioneer on land or sea and she inspired the generation of women who came after her. 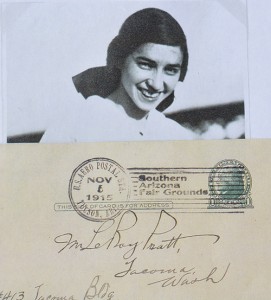 On November 5, 1915 Katherine Stinson dropped a sack of airmail in downtown Tucson, the first sanctioned air mail delivery in Arizona.

In 1908, Katherine Stinson was an 11 year-old student, studying to be a pianist, who took a ride in a hot air balloon. She never wanted to come back down. Stinson became America’s fourth licensed female pilot. She was called The Flying Schoolgirl and unlike Harriet Quimby, Stinson loved to perform aerobatic feats and daredevil stunts in her flying machine. Stinson got her hands dirty, working on aircraft engines and also was an inventor, creating the first enclosed cockpit.

Georgia Ann Thompson was married at age 12 and became a single mother at age 15. She also was the first woman to parachute out of a plane. Lillian Boyer was working as a waitress when a customer asked her if she would like to fly in a plane as a passenger when her shift was over. She agreed and on her second flight crawled out on the wing while the plane was in the air, beginning her career as one of the all-time stunt aerial performers at air shows.

In the story of early aviation, most Americans know about Amelia Earhart and hardly anyone else. These early women aviation pioneers profiled in Barnstormers, Daredevils and Flying Waitresses deserve to be recognized. The American women who became barnstormers and aerial stunt performers did so because at the time that was the only employment opportunities open to them. They were interesting, fascinating people who were ahead of their time, trailblazers who changed our culture and important contributors who improved aviation making it accessible for everyone.

Click here to take a look at some incredible images of women aviators. 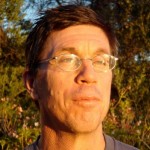 Steve Renzi, a University of Arizona graduate with a degree in history, believes that every generation must learn about who and what came before them or else the lessons learned are lost. As a writer and photographer with a teacher’s certificate in secondary education, Renzi is always searching for new ways of exploring our history. He has written and been published in over 200 magazine and newspaper articles and is currently a writing and photography teacher, as well as a basketball coach. Although he derives great satisfaction from his professional pursuits, his proudest moment was the birth of his twin sons.