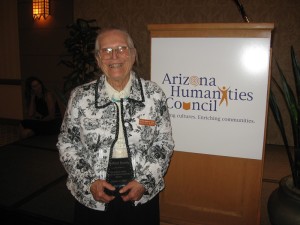 Arizona Humanities was delighted to be among those honored at  Winifred “Winn” Bundy’s  annual Thanksgiving Fiesta on November 22nd at the famed Singing Wind Bookshop. Winn, a former board member, has been a longtime supporter and friend of Arizona Humanities. In fact, Winn was inspired by our founder Lorraine Frank; “I learned a lot from her.”  Winn is quite modest about her own achievements.  She has been the recipient of many awards, including the Lawrence Clark Powell Award for lifetime contribution to literature and history of the southwest, and our own Juliana Yoder Friend of the Humanities Award in 2009. Winn’s bookstore, launched over 50 years ago, is world renowned, and has become a destination highlighted in “Times Magazine, Arizona Highways, the New York Times” and many more. The book store is special of course, but Winn is a treasure in her own right. ” Winn is absolutely unforgettable. She has so much energy and has contributed so much, not only to the Tucson community, but also to the world of authors and books. The Singing Wind has an international reputation.” Juliana Yoder, former Executive Director, Arizona Humanities. In addition to Arizona Humanities, Winn made generous donations to the University of Arizona Poetry Center, and the Tucson Symphony. When asked if she had a life’s motto to share she said ” I believe that there are three different things that are important in life. First, you listen to people. You find out what they need, and then you try to facilitate that.” Winn Bundy’s life’s work has been a testament to her words. From all of us to you, Thank you.