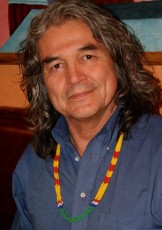 In ancient times the lessons of life and guides to a moralistic life were taught via fables of ancestors and their adventures in a magical world fraught with monsters and heroes.  INYAHOSKIE is one of those heroes who sets out to explore the world and journeys to the Southwest where he encounters a rude and mean tribe all covered with mud. They are hostile towards strangers and INYAHOSKIE is taken captive and prepared for sacrifice to the feathered serpent.  But, INYAHOSKIE is resourceful and creative! Listen to Covarrubias share this Lakota legend and find out if INYAHOSKIE escapes from the fatal hands of his captors.  This presentation educates audience members on the cultural teachings of Native Americans and on the principals guiding communities of a not so ancient past.

Jim Covarrubias is an Arizona native who grew up in Kingman, Arizona, in the beautiful Hualapai Mountains. There are Mexican artists in his lineage so the love of the arts was nurtured as was his fascination for the Western cowboy and Native American history. He travels to art events in Mexico, Japan, Europe and throughout the U.S., where he is billed as the “Fastest Drawer in the West.”  He tells stories as he paints and his deftness of painting techniques and in-depth knowledge of Native American, Mexican and Southwestern cultures fill his entertaining performances with fascinating details.