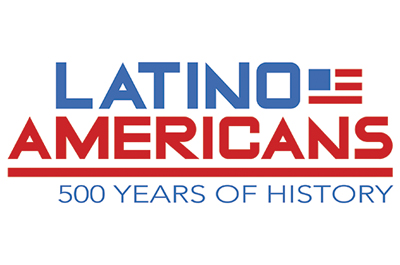 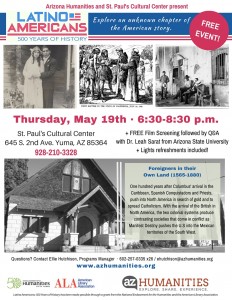 Join Arizona Humanities this spring to explore Latino history and culture! Selections from the NEH-supported documentary film Latino Americans, created for PBS in 2013 will be shown in Flagstaff, Patagonia, Miami, and Yuma. Each host site is paired with a different film and theme to discuss with audiences. The award-winning series chronicles the history of Latinos in the United States from the 16th century to present day. Learn more about the series at www.pbs.org/latino-americans/en.

One hundred years after Columbus’ arrival in the Caribbean, Spanish conquistadors and priests push into North America in search of gold and to spread Catholicism. With the arrival of the British in North America, the two colonial systems produce contrasting societies that come into conflict as Manifest Destiny pushes the United States into the Mexican territories of the South West.

Apolinaria Lorenzana provides a window to the Spanish Mission System, while Mariano Vallejo personifies the era of the Californio rancheros, an elite class who thrive after Mexico gains its independence from Spain. Juan Seguín, a thirdgeneration Tejano, or Texan, is caught between two worlds: his commitment to an independent Texas and his identity as a Mexican. Through the MexicanAmerican War, the United States takes a full half of Mexico’s territory by 1848. More than 70,000 Mexicans are trapped in a strange land; many become American citizens.

As the Gold Rush floods California with settlers, complex and vital communities are overwhelmed. The elites, including Mariano Vallejo and Apolinaria Lorenzana, lose their land. Mexicans and Mexican-Americans are treated as second-class citizens, facing discrimination and racial violence. Resistance to this injustice appears in New Mexico as Las Gorras Blancas (the White Caps) burn Anglo ranches and cut through barbed wire to prevent Anglo encroachment. At the same time, New Mexicans manage to transform themselves through education, preserving Hispano culture in New Mexico and their standing in the midst of an era of conquest and dispossession.