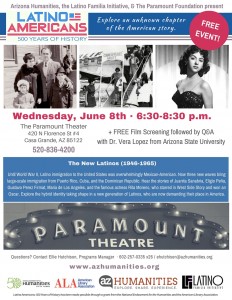 Until World War II, Latino immigration to the United States was overwhelmingly Mexican-American. After the war, three new waves brought large-scale immigration from Puerto Rico, Cuba, and the Dominican Republic. In the acclaimed PBS-documentry episode, The New Latinos (1946-1965), hear the stories of Juanita Sanabria, Eligio Peña, Gustavo Perez Firmat, Maria de Los Angeles, and the famous actress Rita Moreno, who starred in West Side Story and won an Oscar. Explore the hybrid identity taking shape in a new generation.

This free film screening is followed by Q&A with Dr. Vera Lopez from Arizona State University. This program is in partnership with the Latino Familia Initiative, & The Paramount Foundation.

Click here to learn about Latino Americans: 500 Years of History in Casa Grande.

Latino Americans: 500 Years of History has been made possible through a grant from the National Endowment for the Humanities and the American Library Association.