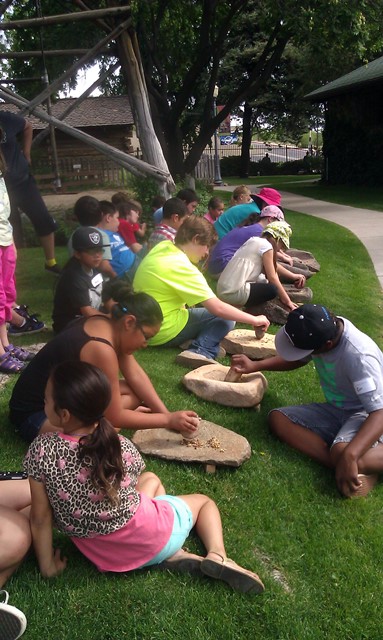 Children learn to grind acorns during the Day in the Life program at the Sharlot Hall Museum.

On July 23 and 24, Prescott’s Sharlot Hall Museum became a very lively place as 30 youngsters took part in a two-day camp to learn about the lives of 19th-century Yavapai and pioneer children. Funded by an Arizona Humanities Opportunity Grant, this cross-cultural “Day in the Life” program became a great hit with the young people.

Yavapai Indian Tribe Cultural Research staff collaborated with Sharlot Hall Museum staff to develop the day camp which included the following activities: archery, quilting, reading animal footprints, American Indian music and dance, butter churning, acorn grinding, and Victorian toys, as well as a tour of the museum. Home-schooled youth from the Prescott area and Yavapai youngsters participated in the program. Comments from the children included “I liked everything because I like learning about pioneer stuff.” Yavapai means “people of the sun,” each basket tells a story and that Indian people made musical instruments using parts of animals and plants.