What happens when sources are hopelessly flawed? What if events temporarily cloud the judgments of normally impartial observers? These were the problems I encountered when I became the historical consultant for the documentary film, Power’s War, based on the deadliest gunfight in Arizona history. Although Tom and John Power and hired hand Tom Sisson were sentenced to life in prison for the premeditated murder of three lawmen, few people familiar with the story agree on what actually happened when the officers came to arrest the Power brothers for draft evasion on Feb. 10, 1918, at their remote cabin in the Galiuro Mountains.

Over the years, people close to the story have produced numerous books speculating about the gunfight. Supporters of the Power family contend that they just shot in self-defense when lawmen killed their father with his hands up in the doorway of the cabin. The lawmen’s side argues that the Powers were draft evaders and possibly even murderers, so deadly force was justified. Newspaper accounts, punctuated by wartime hyperbole, were equally divided between the two sides. So many theories exist about alleged feuds and conspiracies surrounding the event that an entire doctoral dissertation in Folklore has been written about the Power shootout. 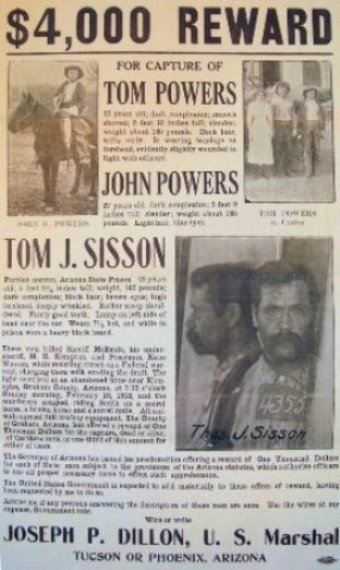 Even the usually reliable government documents fell short of expectations. I was able to find a sprinkling of documents in local archives, but most had vanished over the years, including the trial transcripts. Documents in federal archives contained many of the same distortions that showed up in newspaper accounts. No wonder the cause of this shootout has remained a mystery for almost a century—all the logical sources were tainted by the rhetoric of war.

The only way to understand this tragic event is to place it within the context of World War I. Our nation’s entrance into the Great War was controversial and greeted by many Americans with apathy and even outright protest. The Power family lived far from civilization by choice. They had little use for government or society or the war raging in Europe. But even in their remote canyon, far from the battlefields, they could not escape the changes that were happening around them.

Americans were asked by federal officials to spy on their neighbors and family members and to turn in anyone who resisted the draft or condemned the war in private conversation. Freedom of speech was temporarily suspended, and those who protested the war were locked away in prison. History books teach us about the slaughter in the trenches and the almost 30 million who died during World War I, but often neglect the powerful stories of how civil liberties were temporarily suspended in America. The Power shootout remains a mystery not for lack of evidence, but because truth was so difficult to find during World War I. Click here to read more on the Power’s War Facebook page.

Last Chance in Arizona: Water/Ways Makes Final Stop at Lake Havasu City
We use cookies to ensure that we give you the best experience on our website. If you continue to use this site we will assume that you are happy with it.AcceptDecline
Revoke cookies